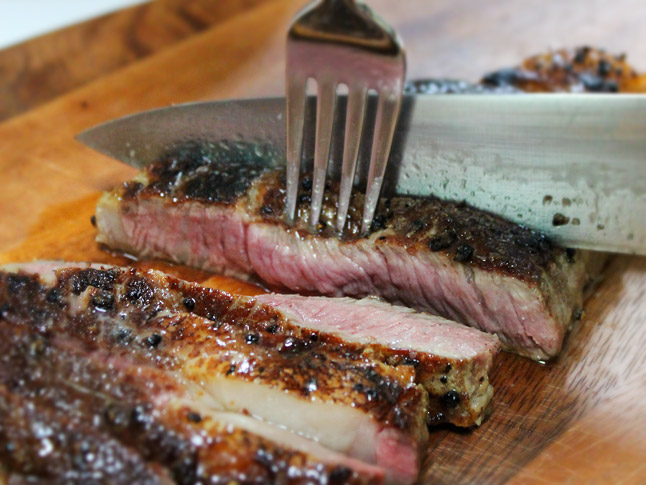 I don’t consider myself much of a “steak and potato” guy. If I were in a situation where I was forced at gunpoint to self-identify using only pairings of disparate foods, I would describe myself as more of a “chorizo and cheese” kind of fella. I would also have to reconsider the life choices that led to me having to negotiate my way out of a gunfight using descriptive language about meat. But that’s neither here, nor there.

You see, it’s not often that I get the urge to throw a charred piece of meat on a plate, growling and grunting, eating the meat with my bare paws. That craving may not strike often, but when it does, sweet mercy, I want it to be perfect. I want my meat simply prepared, cooked perfectly, with a seasoned brown crust on the outside, and a warm pink middle. I don’t want to muck around too much with technique, I don’t want to poke at my steak with a meat thermometer to check for doneness, and I don’t want to mask the flavor of my steak with fancy pan sauces. Keep it simple. A few potatoes. Perhaps a little spinach or asparagus. A decent cut of meat doesn’t need much else to make it sing. Here’s how I do it. 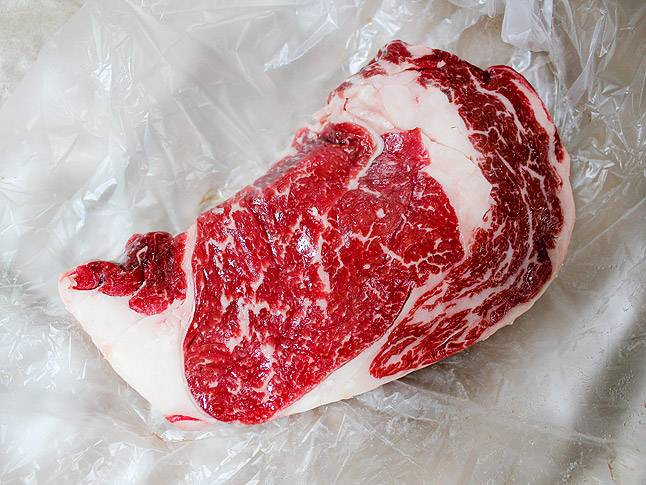 First, select a good cut of meat. It seems obvious, but you’re not going to coax good flavor or texture out of a $4 shrinkwrapped piece of meat with a “Manager’s Special” sticker on it. Start at your neighborhood grocery store, specialty store, or butcher. A rib eye is a perfect steak for this preparation; it’s got tons of flavor, with thick ribbons of succulent fat. Look for a steak that’s about an inch and a half thick, with plenty of fat marbled throughout. A good boneless ribeye should run you $15-$18 bucks, which seems steep, though it is plenty of food for two people to share. And besides, if a piece of meat this good isn’t in the budget for this week, this isn’t the recipe for you. Put it away to come back to later, and have some fajitas, instead. No good-looking ribeyes? This method works equally well with a New York Strip. 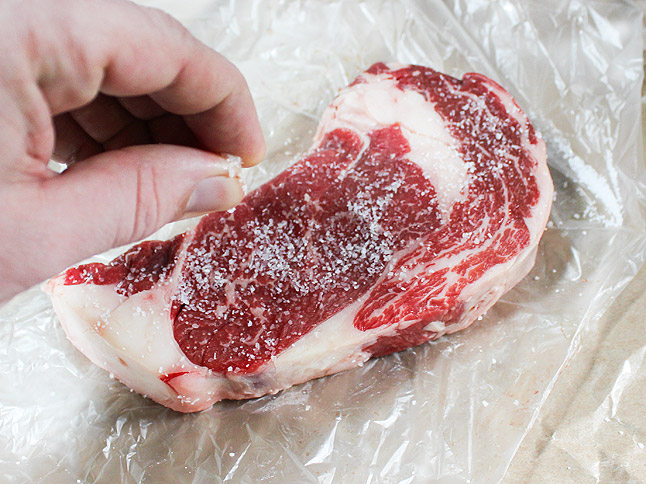 Unwrap your steak, and allow it to come to room temperature. It’s not going to spoil; allowing the chill to come off the meat helps a seared crust to form. Searing doesn’t, contrary to what you may have heard, “seal in flavor.” That’s kind of ridiculous, when you think about it. A seared crust does, however, taste incredible, and provides another layer of satisfying texture for your finished steak. Preheat your oven to 500 degrees, and season the top of the steak with kosher salt and freshly-cracked pepper. Don’t season your meat until right before you are ready to put it in the pan; salting too far ahead of time can change the texture. Be generous with your salt; a good steak can take a lot more than you’d think. Resist the urge to apply other seasonings. When you are working with this good a cut of meat, you don’t want it to taste like garlic or Lawry’s. You want it to taste like meat, and salt and pepper is all it needs. 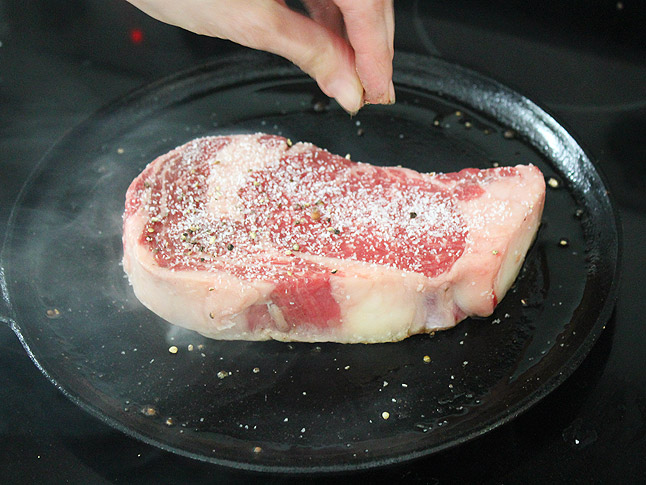 On the stovetop, heat a cast iron skillet over high heat. Add a small amount of cooking oil; it helps transfer heat between the pan and the steak, helping your perfect seasoned crust to form. Heat the pan until the oil just starts to smoke. Turn on your hood vent, open a window, and bury your smoke detector under a few pillows. Place your steak, seasoned side-down, on the hot pan, and leave it alone. Don’t flip it, wiggle it, or adjust it. Let it be. 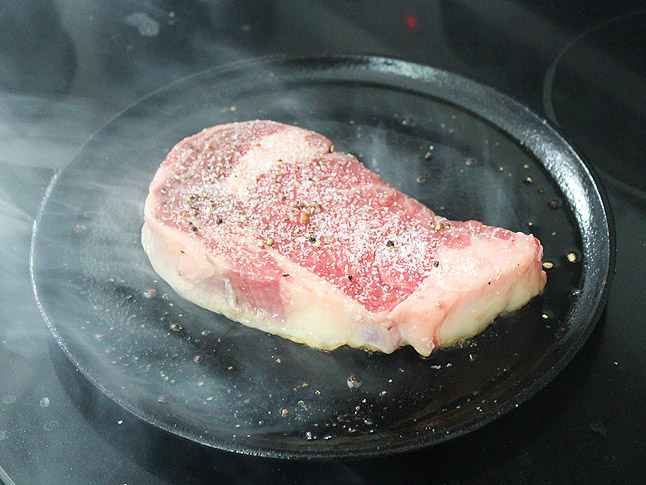 Allow to cook over high heat for exactly two minutes. While it cooks, you can season the other side generously with more kosher salt and pepper. 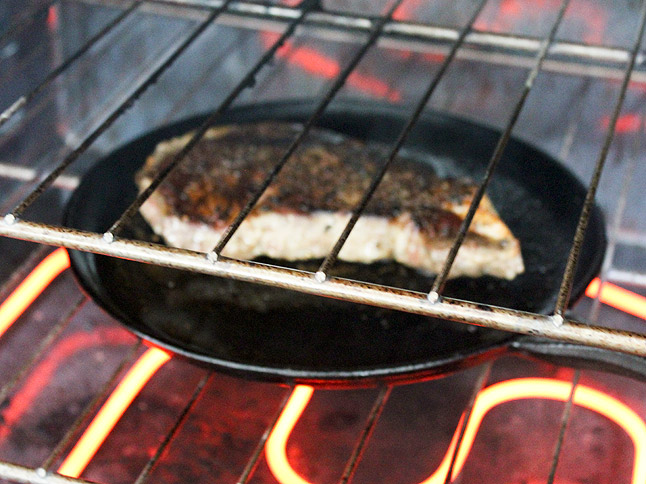 After it cooks on the first side for two minutes, flip the steak over with a pair of tongs, and immediately transfer the whole pan right into your preheated 500 degree oven. Allow to cook in the oven for exactly two more minutes. 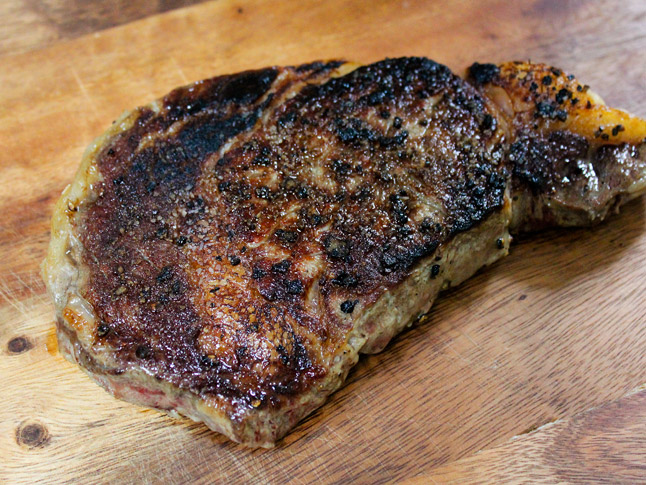 Using tongs, transfer your steak from the oven to a cutting board. Now, this is a very important step: Leave your steak alone. Leave it alone! Don’t cut into it, wiggle it, move it, or press it. Don’t even look at it too long. There are a few reasons for this. First, we need to allow the steak to finish cooking to perfection, somewhere between the top end of medium-rare, but not quite to medium, depending on the thickness of the cut. (Want your steak cooked to a doneness greater than medium? Frankly, we’d rather you read another website. Beef this good shouldn’t be pummeled into overcooked grey toughness by an onslaught of heat and squeamishness.) Allowing the steak to sit lets it finish cooking using its own carryover heat. More importantly, allowing your steak to rest for ten minutes will allow all of the juices to redistribute themselves and settle down. If you take a steak out of a pan and cut into it immediately, all of the juices will run out onto the floor, delighting the dog but leaving you with a dry, tough slab of chewy beef. Be patient, let the steak rest, and those juices will spread back throughout the fibers of the meat, and you’ll be rewarded with juicy, flavorful perfection. I can’t stress the importance of this enough. Leave your steak alone for ten minutes after you take it out of the pan. 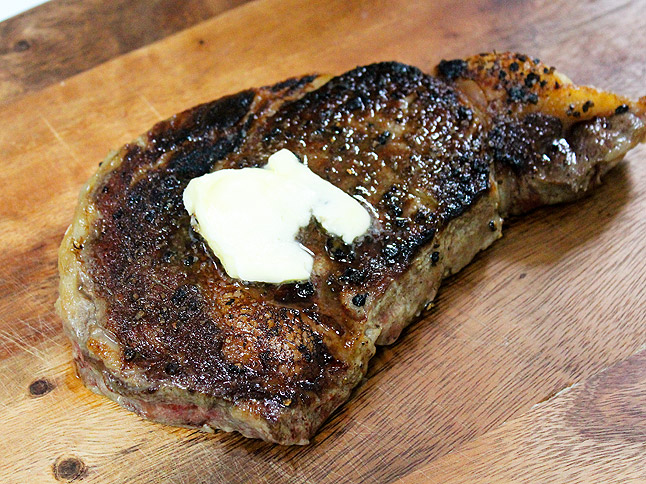 Okay, if you simply must do something while you wait, you can allow a tablespoon of butter to melt onto the surface of the steak.

After your steak has been allowed to properly rest, slice your perfectly cooked steak and serve with your choice of sides. Or, optionally, eat it with your fingers like a growling monster, standing over the cutting board.

Got it? Start with a great cut. Season it minimally. Two minutes in a cast iron pan with oil over high heat, flip, two more minutes in a 500 degree oven. Rest ten minutes, and serve. Let beef and fire do the work. Any more fussing than that, and you’re just getting in the way.